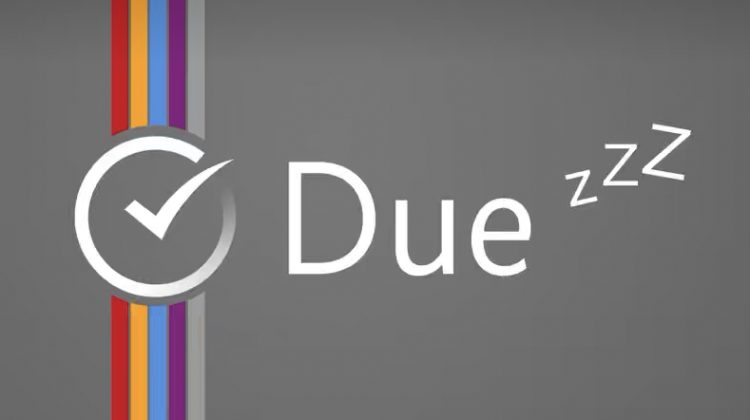 Every once in awhile, I come across a product or an app that I didn’t know I needed, but once I have it, I wonder how I ever got along without it!

Numerous products fit that category for me. Recently they include my Spyderco pocket knife, my Olight flashlight, and my Apple Watch. I already had other pocket knives, flashlights, and watches, but none became as indispensable as those I carry now and use daily.

It’s the same with some of the apps I use on my Mac and my iPhone and iPad, such as ScanPro, Things, and Ulysses. Indeed, I’ve had (and still have) other apps that can scan paper, track my things-to-do, and apps for writing. But none have so revolutionized how I do each of those things as these three has done.

This week, I recently discovered the reminder app called Due (or, I should say, rediscovered — it’s an old app; it’s been around almost ten years). I had heard of it before, but who needs another reminder app!

The Reminders app from Apple comes included on every iPhone and iPad, and although pretty basic, works for probably half of all the people that want to track tasks on their electronic devices. And there are tons more task and to-do apps — more than 1,000 in the App Store for Apple devices.

Almost two years ago, I started using Things as my task manager and to-do list. While relatively simple to use, it’s also very powerful and a great way to track everything you need or want to do in your life. I still use it every day — it’s running on all of my Apple devices — Mac, iPhone, iPad, and Apple Watch. But like most task managers, it was way more than I needed when all I wanted was a simple reminder or alarm that I could set quickly and easily.

So where does Due fit in, and why do I (and maybe you!) need it?

Due is a reminders app. It could be used as a to-do app, but it’s not intended to be a task manager and does not replace Things or any of the other multitude of powerful task managers out there.

From their website: “Never forget anything, ever again. Due remembers everything you need so you don’t have to. It’s lightning-fast to set reminders, and it’s so persistent you can’t forget anything.”

The unique interface for Due lets you enter reminders very quickly and easily. And when that reminder comes due, it will persistently remind you about it, on a schedule specified by you, until you can mark it completed or postponed to a new time.

Everything entered in Due must have a due date and time. Unlike a task manager where you might list things you need to accomplish but don’t have a deadline, items entered in Due have specific times for alarms or deadlines. You could use your calendar app for reminders with deadlines, too, but not nearly as quickly or easily as Due.

To give you a couple of examples. On Tuesday I have a dentist appointment at 8:30 AM (it’s already on my calendar). Because of my recent knee surgery, I need to take an antibiotic pill one hour before my appointment. So I have a reminder set for 7:30 AM Tuesday to make sure I don’t forget it. It took just a few seconds to set the reminder in Due.

Another example. Since I’m still unemployed, I have to apply for unemployment every two weeks. I prefer to file on Sunday, the first day I’m eligible to apply each biweekly period. So I set up a simple reminder that goes off at 9:30 AM every other Sunday morning. Repeating reminders are straightforward to set up. As soon as I checked off that reminder today, a new reminder was created automatically for two weeks.

I forgot one of my Zoom meetings last week, and had it not been for a text message from one of the other participants, I would have missed it altogether, even though it was on my calendar. But my calendar app (as is the case with most calendar apps) only reminded me once of that meeting, and I didn’t see it because I was having dinner at the time. So now, I set a reminder in Due to go off ten minutes before the meeting and keep reminding me every five minutes until I acknowledge the reminder.

Due also has timers. Here again, not unique to Due — lots of apps have timers, including the alarm app (Clock) that came on my iPhone. But unlike most others, Due allows you to run multiple timers concurrently. For example, you put your clothes in the dryer and want to be reminded to take them out in 45 minutes, so you set a timer. While you’re waiting, you decide to have a cup of tea and want to let it steep for precisely four minutes, so you set a timer for that. And then you decide you have time for a 20-minute power nap and set a timer for that. All timers can be running (and paused or restarted if necessary) while other timers are running. Cool!

Due runs on all my Apple devices. There is one version that covers the iPhone, iPad, and Apple Watch. Another version runs on the Mac. All of them sync together automatically via iCloud. So a reminder entered on any one of my Apple devices instantly shows up on all the others. Due takes full advantage of the Apple ecosystem.

Due is not free, but its cost is easily justified if you have important events you can’t afford to forget. I justified it for myself just as a persistent reminder to file for my unemployment (I had already forgotten once). The iOS version, which runs on iPhone, iPad, and Apple Watch, costs $6.99 in Apple’s App Store. The Mac version is $9.99 in Apple’s Mac Store.

I’ve only been using Due for a few days, but already I’m finding it indispensable. It is so easy to enter new reminders with a unique, easy to adjust interface. It’s reliable and runs on all my Apple devices. I recommend it highly. I’ll give you an update down the road once I have more history using it.