You are here: Home / Apple / Productivity and Writing: Eight Mac Apps I Use Everyday 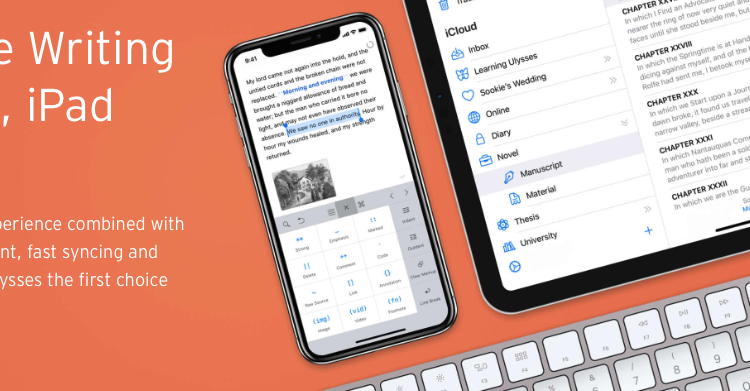 This is a list of eight of my very favorite apps, all of which I use on pretty much a daily basis. I wouldn’t want to work without any of these, although I admit there is some overlap in functionality and you might not need all of these. They all run on Mac, iPad, and iPhone, and sync via iCloud allowing you to move seamlessly between devices. None are available at this time for PC or Android devices, although that could change in the future.

All are third-party apps. If you’re a Mac user, you probably know that Apple provides a good selection of apps on every Mac at no extra charge, and I use many of them, also. I’ll talk more about the Apple apps I use in another post. The eight apps I talk about in this blog post bring something to the table (er, the Mac) that the Apple apps don’t provide.

I love writing. Since the COVID-19 pandemic, I spend much of my days researching and writing. I have a goal to write 2,000 words a day. Many days I write more than that, some days less. A huge part of my success in meeting that goal revolves around these apps.

There are lots of apps out there that are great for writers. I’ve tried many of them — Scrivener, iWrite, Pages, Evernote, Bear, and many more. The app I love more than any other, however, is Ulysses. I’ve been writing with Ulysses for almost four years, this year more than ever, and it has revolutionized my writing. Ulysses makes it FUN to write, and it takes away all those concerns writers have about writing — saving, backing up, file names, organizing, spelling and grammar checking, providing a distraction-free environment, and more. For many, maybe most, writers it’s all they’ll ever need.

Ulysses is Mac and iOS only — no PC or web versions at this point. But it’s so good, you could use Ulysses alone as justification for getting a Mac if you don’t have one already. It syncs with your iOS devices via iCloud, and its matching apps for the iPhone and iPad have feature-parity with the macOS version.

It saves and syncs continuously, even offering backup versions so you can return to a version an hour old, or a day old. Everything is saved in plain text (it uses Markdown+ to format your text), making files tiny, and saving and opening very rapidly no matter how big they are. In fact, there is only one file. All of your text is saved in one place. With the powerful search and tag tools in Ulysses, you can find virtually anything you’re looking for in seconds or a fraction thereof.

It has a different UI (user interface) than most writing apps. On the left is a list of all the groups — like folders — into which your writing is organized. Select a group, and in the next panel is a list of sheets — individual documents and pieces of documents — that are in that group. In the third panel is the editor, where the writing and editing is done. With a simple keyboard command, you can show one, two, or all three panels, making your UI as distraction-free as possible.

An optional fourth panel that can be toggled on and off shows the dashboard for a particular sheet — attachments including photos, notes, keywords, links, writing goals and stats, and even an outline updated as you write. In the latest version (v. 20), it’s also where you control spell and grammar checking.

Incidentally, just this week I founded a Facebook group for users of the Ulysses app. Click here for more information and to join (free, of course).

Read more about Ulysses on their website, https://ulysses.app. Purchase it (or download a free trial) from the Mac App Store for about $6/month or $50/annually. I’m not fond of subscription apps, but this one is easily worth that as far as I’m concerned. I’ve been using it since 2016.

What if you had a really great idea — something you just came across online or while you were watching TV or chatting with a friend. You know you have to record it somehow before the idea leaves you. If you wait, it’ll be “out of sight, out of mind” almost immediately.

So, you quickly open your phone, start your notes app or word processing, start a new file, and — in the 5-10 seconds it takes to do that, boom, the idea’s gone. Later you rack your brain trying recall what that really great idea was.

That’s why Drafts was written. It’s a small, fast app, that almost instantly opens to a blank page, cursor blinking, ready in a second or two to record that million-dollar idea. Keep the app icon on your home screen so it’s readily available at any moment, day or night.

If you have another great idea, open the app again and if it’s been 30 seconds or a minute or whatever time you’ve configured in preferences, again you have a blank page instantly ready to record your idea. (If the previous use is still showing, one button push gives you a new page, or you can add to the page that is already there.)

Each of your notes are readily accessible with a quick left-to-right swipe. You can easily search them or sort them or trash the ones you no longer need. And if you want to move the idea into Ulysses, for example, all you need to do is hit the share button and send the link to Ulysses — put it in your ideas sheet and you’re all set to retrieve it there anytime in the future.

MindNodeis mind-mapping software. It is the newest of my apps and, to be honest, I’m still learning it. But I’m excited about the way it works allowing you to brainstorm and organize your ideas or plans about nearly anything. I used it for this article to list my favorite apps, deciding what was most important and in what order I wanted to write about them. I like apps that allow you to work nonlinearly; Ulysses is great for that, allowing you to write in whatever order you want and organizing it later, and MindNode works that way, too, allowing you to get your ideas written down as they come to you and organizing them later. I expect to have more to say after I’ve been using MindNode more.

Everyone needs a task manager — a to-do list. I’ve been using to-do lists for as long as I can remember. Originally they were on paper, and that still works best for many users. But I like to have them on my electronic devices. Things is a very sophisticated task manager that is also simple to use, and like every other app listed here, runs on my Mac, iPad, and iPhone, and is synced via iCloud so every device is on the same page. It’s very satisfying to check things off as you accomplish them, and they’re automatically logged for the record. If you don’t finish something today, it’s automatically moved to tomorrow’s list. You can also plan items in advance assigning dates on which they’re to be done, as well as due dates and alarms to remind you they’re coming due.

I’ve written about Due before. It’s one of those apps I didn’t know I needed until I had it. It’s kind of a to-do list, except that each item must have a specific alarm or due date. The best use for Due is to remind you of things that must be done at a specific time, and you want to be reminded of it until it’s done. For instance, if I want to return a phone call at an agreed upon time, I set a reminder in Due. Due has a unique interface that makes it easy to rapidly enter a reminder, more quickly than your alarm clock or calendar app, which can probably do the same thing but with a lot more baggage. It also has timers and can run multiple timers concurrently. I use Due every day for something.

BusyCal is my calendar app on my Mac. It’s compatible with Apple’s Calendar app so the data can be read on either app. Although I have BusyCal on my iPhone and iPad also, I prefer the calendar function in Informant on them. All read the same data file synced via iCloud, so all my devices are always up to date with each other.

Bear is a great note-taking app. I like it much better than the Notes app that Apple includes on each device. I used to do nearly all my writing in Bear, but over the last year or so have moved most of my writing to Ulysses. But I still use Bear for things like keeping track of dates I want to remember permanently (dates I purchased things, for instance), and notes about recurring bills like credit card payments, anything important that I want to be sure I don’t forget.

There is some overlap with other apps here, too — some will keep track of bills due with their accounting software, for instance, and that’s a good idea, too. I just find Bear simpler and faster for many different kinds of notes. I’ve been using Bear for quite a few years, but I am considering moving everything to Ulysses and discontinuing my subscription to Bear. But right now I’m still using it regularly for a few things.

Day One is the best journaling app for Mac, bar none. Journaling is a great way to keep a record of your life. I won’t go into all the reasons to do it, but there are many. Day One is the easiest way not only to record your thoughts and activities day to day, but also add photos and other attachments to your daily journal. It also automatically includes a record of where you were when you were writing, what the weather was, and other details that are added automatically. I haven’t been as consistent as I’d like to be, but I’m trying to get into more of a habit of journaling every day. Day One makes it easy and fun.

I also just started doing some journaling in Ulysses. I have a single sheet set up as a journal and with a keyboard stroke I can enter the date and time, then a one- or two-sentence entry. It’s the simplest kind of journalling. It’s easy to add a single sentence every day, highlighting the one or two most significant parts of your day.