You are here: Home / Blog / Voting by Mail — An Update 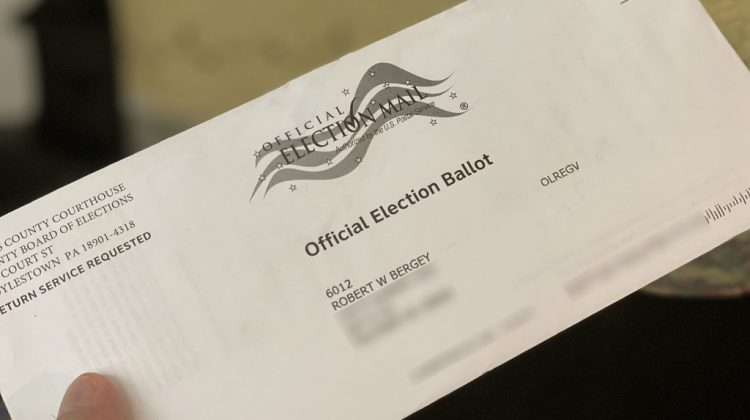 Yesterday I received my official ballot to vote in Pennsylvania’s Primary Election on June 2, 2020. I had requested it a few weeks ago when the pandemic was at its peak, not knowing if I’d be able to get out and vote but not wanting to miss the opportunity to express my opinion at the polls.

Voting by mail is certainly not new. It started in the 1860s during the Civil War to allow the military to vote. Ever since then, allowing the military to vote by mail has been a normal part of our elections. Over the years it has expanded to allow any citizen who might not be able to vote at the polls in person, whether through illness or travel or some other reason, to request a ballot in advance and vote by mail. Here’s just a bit of the history; there is much more online — just do a Google search on voting by mail:

How Do You Know Voting by Mail Works? The US Military’s Done It Since the Civil War.

I’ve voted by mail (absentee ballot) a number of times over the years. I never know my work schedule in my driving career more than about a week in advance, and if I’m working on Election Day, almost certainly I won’t be able to get to the polls, what with the long hours involved and distances we travel for work. So voting by mail was my only chance of participating.

I’ve been dismayed at the number of Facebook users who have been posting memes on Facebook opposing voting by mail. Most of them have been unwilling to respond to questions about why they’re opposed to voting by mail, but a few have admitted they don’t trust that the system can’t be manipulated giving possible advantage to one candidate or another via mail-in ballots. But up to now, to my knowledge, there has never been a notable case of voter fraud with mail-in ballots, certainly nothing worse than voting at the polls.

Discouraging voting by mail has been a tactic used by both political parties over the years, Republicans and Democrats alike, to suppress the vote. This year it’s the Republican’s turn, apparently, although mostly from the far-right fringe of the party. The postcard I received in the mail a few weeks ago with instructions on how to get my ballot and vote by mail actually came from the Republican party in my area (I’m a registered Republican). So it’s not all Republicans. But so far this year I haven’t seen the anti-vote-by-mail messages from any of my Democrat friends.

I looked over the ballot more closely this year than ever, especially as to how someone might “fix” a vote-by-mail campaign. It wouldn’t be easy. The ballot comes with clear instructions on filling it out, placing it within an inner plain envelope labeled only with “Official Election Ballot” on the front, which then gets sealed and placed within an outer envelope. Any marks placed on the inner envelope automatically disqualify the vote.

The outer envelope is pre-addressed for your local County Board of Elections, including being already printed with your name and return address, and your “Voter’s declaration” on the outside back of the envelope. Once the envelope is certified at the county and then separated from the inner envelope, there is no way to know who voted for whom. The fact that you voted is tallied via the outer envelope just as if you voted at the polls, so you can’t vote both by mail and in person — no one can vote more than once. You may take your envelope to the poll on election day rather than mail it if you wish, but you cannot send it with someone else — you must hand-carry it yourself and you may submit only one envelope. It seems like a pretty simple but secure system to me.

The only downside is that the mailing envelope isn’t postage-paid — you must supply your own postage stamp. But that’s not unreasonable. That helps prevent disgruntled citizens from returning an empty envelope just to spend taxpayer funds needlessly. [EDIT: I’ve already heard from some voters that their return envelope was postage-paid, so this apparently varies by county. Make sure you look closely at your return envelope.]

At least for the primary, I’m giving voting by mail a go again this year. If you want to vote by mail in the PA June Primary Election, you have until May 26, 2020, to request your ballot. Go to https://votesPA.com/ to sign in and register to vote by mail. If you’re older, ill, or traveling, I would strongly encourage you to do so.

And don’t forget to return it on time! Ballots must be received by your county election office in Pennsylvania by 8 PM, June 2, 2020. The postmark date is irrelevant.